magine walking through a far-flung island of forest and stumbling across a bright, pink lake. Or quietly rowing your boat through a sea of floating lotus flowers that expand as far as the eye can see. Dreamy? Yes, but also completely possible if you consider a visit to one of the world's strangest lakes.

Because lakes are mostly contained ecosystems, they have the uncanny ability to evolve in ways you might expect to come from the imagination of Dr. Seuss. Like Spotted Lake in Canada, which is considered one of the most bizarre natural wonders in the world, transmogrifying from an average-looking alpine lake into a field of gigantic green polka dots every summer.

There are more than 3 million or so lakes worldwide, so it takes quite an astounding trick to stand out. Some that caught our attention: a lake made of one of the purest skincare ingredients on earth and another with six-foot waves ideal for freshwater surfing. 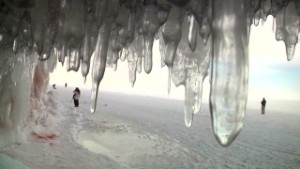 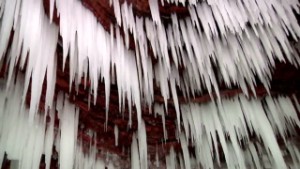 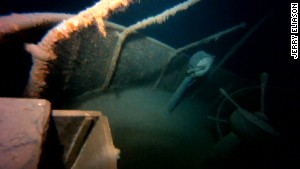 Nature can also cook up some pretty forbidding lakeside scenes. At Tanzania's Lake Natron, where the water reaches 140 degrees, petrified bats and birds (even doves) have been found washed ashore.

For most travelers, of course, a lake vacation brings to mind more soothing, nostalgia-laden images. It's as classic an American experience as a summer road trip. So by all means, go visit any number of the beautiful lakes in our country's great outdoors. But if you're looking for a one-of-a-kind, see-it-to-believe-it experience, we recommend a detour to one of these peculiar pools instead.

By the ocean, jellyfish are a nuisance to swimmers, but taking a dip with them in Palau's Jellyfish Lake is an unexpected pleasure. These golden jellyfish are glowing orbs of pink and purple that range in size from a penny to a soccer ball and were cut off from their natural predators millennia ago. With no need to defend themselves, they evolved without the ability to sting—the only such known species of jellyfish. These blissful creatures do nothing more than soak up the sunlight (their main source of nutrition)—oh, and entertain the humans, who have taken to snorkeling in their midst.

The yearly sprouting of thousands upon thousands of red lotus flowers completely transforms the surface of Lake Nong Harn into an 8,000-acre vision of buoyant blossoms. This aquatic garden begins to grow in October, just after the rainy season. When it reaches full bloom in December, nearby villagers, who trace the origins of the lake to a tragic love myth, take to boats to enjoy the miraculous scenery. The sea of red lotuses—Talay Bua Daeng, as the locals say—is best viewed during daylight hours before noon, when the flowers are fully opened, revealing their vibrant, pink color (not red, despite the name). The lake, which is located in the province of Udon Thani, 350 miles north of Bangkok, stays rosy until March.

Some lakes just stick with you, but none more than this one. Made of about 10 million tons of liquid asphalt and spread over a massive 100 acres, La Brea Pitch Lake is the largest natural deposit of pitch on earth. Its gooey emulsion of water, gas, bitumen, and minerals has been a major source of asphalt throughout the world ever since 1595, when Sir Walter Raleigh happened upon its shores on his quest to find El Dorado. Too bad he wasn't looking for the Fountain of Youth, which is the nickname local villagers had given to the warm, healing pools of sulfur-infused waters that pop up around the lake during rainy season (June to November).

Water at the center of this 200-foot-wide lakelet stays in a constant rolling boil so hot that no one has been able to take an accurate measurement. But consider that at the shore, this lake already measures between 180 and 197 degrees. Scientists believe the vapor-covered cauldron is really a flooded fumarole, or a vent that leads directly down to volcanic magma. It's not the largest heated lake in the world—that title belongs to the magnificent, comparatively temperate Rotorua lakes in New Zealand—but Boiling Lake is certainly the most forbidding.

Problem: You can't decide if you want to visit a lake or a river. Solution: Lake Manicouagan, in Quebec. Plenty of lakes are round in shape, but this is the only known lake that has been cast into the form of a ring. It was created 200 million years ago when a 3.1-mile-diameter asteroid—the fifth largest ever—crashed into the earth and left behind what appears to be the world's only concentric river. At 1,206 square miles, roughly half the size of Delaware, it's one of the few lakes whose primary island takes up more surface area than actual water, giving you the best of both a lake and a river.

A lake so surreal in color, Salvador Dalí himself might have dreamed it up. More likely, this russet-red lake fueled the imagination of the great mustachioed painter, who once traveled to this far reach of Bolivia, now called Dalí Valley, looking for inspiration. The burgundy color is derived from plankton, red algae, and a trove of other microorganisms that serve as food for the lake's other outstanding feature—the rare puna flamingo, whose presence makes the place seem something like a mash-up of Mars and the Caribbean. It's one of three cold-weather flamingo species that speckle their tropical pink hues over the otherwise forbidding landscape: a 23-square-mile stretch of water beneath titanic maroon mountains, at a windswept 14,000 feet above sea level.

Good luck finding a spot to enjoy this lake, where the air outside can reach a frigid 60 degrees below zero and the stuff inside measures a fiery 1,700 degrees above. One of five lava lakes worldwide, Mount Erebus stands out for its location in Antarctica, the continent that lays claim to having the most ice. The pool of molten rock can be found 12,500 feet above sea level atop Mount Erebus—a volcano that has been consistently erupting since 1972. Before you even think about getting close, remember that it has been known to lob 10-foot-wide lava bombs without notice.

The source of all the world's strawberry milkshakes? Chewing gum? Pepto-Bismol? Nope, just a lake filled with perfectly pink water. It's no trick of light either; the 2,000-foot-long lake stays rosy whether day or night and keeps its hue even if taken away in a bottle. Scientists are baffled by the exact cause, although they have narrowed it down to a few microorganisms and bacteria that live in the lake's salty deposits. Lake Hillier is located on the Recherche Archipelago in Western Australia, and, as if to drive the point home, only a narrow stretch of eucalyptus-tree-covered coastline separates the bubblegum lake from the sapphire blue Southern Ocean. 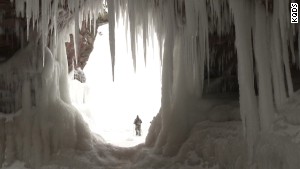 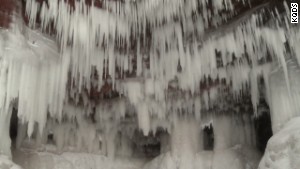 Sometimes, lakes have the same muscle as oceans. Take the Great Lakes, for example. From Minnesota to Illinois to Michigan, the lakes' swollen waves have made them an unexpected haven for surfers, with northern Lake Superior known to be the best place to hang ten. A steady flow of powerful winds blowing over the surface causes the rare freshwater breakers that "range from one to 30 feet, but average between two and six feet," according to Ryan Gerard, president of Third Coast Surf Shop in St. Joseph, MI (of all places). Winter's waves are usually the strongest, but any surf on these lakes is a sight for sore eyes to landlocked Midwesterners.

Within Alberta's Jasper National Park exists a lake so mysterious that you may never find it. The reason? Every winter, its water completely disappears. If you're guessing evaporation, think again: the water drains from the bottom as if it were a gigantic bathtub. Medicine Lake is in fact a four-mile-long, 100-foot-deep flood caused when melting glaciers from the surrounding mountains meet with the Maligne River. Their summer fling happens to be located directly on top of a series of sinkholes that absorb the river, sending it though a 10-mile course of underwater caves (one of the largest inaccessible places on earth), after which it appears above ground again in Maligne Canyon. Even though 4,000 gallons seep out every second, the phenomenon takes weeks. The area's indigenous residents used to call it Magic Lake, and the disappearing act remained a mystery until the 1970s, when biodegradable dye revealed the true nature of its sortilege.

Lake Natron adds new meaning to the idea of preserving wildlife; it literally turns animals into stone. Perfectly petrified bats and birds (even doves) have been found washed ashore, as if they've suffered the cursed fate of looking into the eyes of the Greek Gorgon Medusa. The forbidding lake, whose temperatures can reach 140 degrees, developed its rare calcifying powers from toxic ash emitted by surrounding volcanoes. No one is sure exactly how the animals die, but it is thought that the lake's tremendously reflective surface tricks birds into taking a dive...from which they never recover.

There are no more perfect puddles on earth than Lake McKenzie. To start, the impossibly snow-white sand found along its shores is made of 100 percent pure silica, a naturally occurring mineral often used in beauty products that is said to benefit hair, skin, and nails. But the lake gets more beguiling; this is the crystal-clear water that dreams are made of. Despite being located on Fraser Island, a 75-mile-long sand bar in the Coral Sea, the 370-acre lake is completely fed by freshwater from the clouds. It is one of only 80 lakes in the world that exist entirely above the groundwater table (technically called a perched lake). As a result, its only source is pure rain, which is too acidic to sustain aquatic life—plant, animal, or anything other than you, relaxing.

10 places we dare you to visit

Pavilion Lake takes the nostalgia of a lakeside summer vacation to a back-in-time extreme. On the surface, it looks like any number of British Columbia's pristine alpine pools, but a peek beneath is like peering back to the beginnings of life on earth. The floor of the lake is festooned with a rare type of freshwater coral that mimics some of the first life that ever formed on this planet, no less than 2.5 billion years ago. NASA and the Canadian Space Agency have both set up shop on the lake's shores to study these living fossils for clues about how life began on earth and possibly on other planets.

In 1986, Lake Nyos caused one of the largest unusual natural disasters in recorded history when it literally blew up without warning. It sent a torrent of water 300 feet into the air, followed by a small tsunami to the lake's shores. Then came a burst of carbon dioxide at 60 miles an hour, creating a roving toxic cloud that suffocated 1,746 people in three days, before dispersing. Scary, but the lake is now safe to see. A buildup of carbon dioxide at the lake's bottom set off the explosion; French and American scientists have since introduced a system of piping to artificially remove the gas.

The Dead Sea is 10 times saltier than almost any other sea on earth (35 percent compared to 3.5 percent). And because one part in three is salt, you can float on its surface. Its salinity is said to have healing powers for skin and joints, and at 1,486 feet below sea level, it is the lowest place on earth. But did you trivia buffs also know that the Dead Sea is neither a sea nor dead? It is a lake sandwiched between Israel and Jordan, and since the 1930s experts have known that salt-friendly microbes call this place home. For eons it was believed that the lake's only source was the River Jordan, but in 2011, researchers discovered that it is also fed by freshwater springs on the floor. 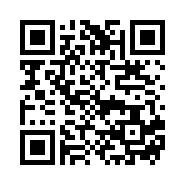